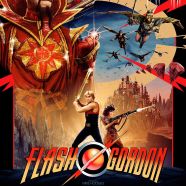 Posted by ruthmedia on August 4, 2020 in Uncategorized | Leave a comment

Synopsis: A football player and his friends travel to the planet Mongo and find themselves fighting the tyranny of Ming the Merciless, in order to save Earth.

Flash Gordon, thanks to some legendary performances, striking visuals and an absolutely outstanding soundtrack by Queen, went on to become a major cult classic.

Although NASA scientists are claiming that an unexpected eclipse and strange “hot hail” are nothing to worry about, Dr. Hans Zarkov (Topol) knows better, and takes football star Flash Gordon (Sam J. Jones) and travel agent Dale Arden (Melody Anderson) with him into space to rectify things. They land on planet Mongo, where the despot Ming the Merciless (Max von Sydow) is attacking Earth out of pure boredom. With the help of a race of Hawkmen, Flash and the gang struggle to save their home planet.

Brian Blessed, who plays Prince Vultan in the film, is adamant that it still holds up after forty  years:

“It’s an absolute masterpiece,” he told SFX recently. “It’s got a comic style in the writing and in the colour. The acting’s marvellous, everyone’s very well cast, the music is sensational, the camerawork, the lighting, the whole thing is quite amazing.

He continued that the best thing to happen to him was the expression “Gordon’s alive!” which he has used as an opener to his touring one-man shows.

“It makes people cheer up. It’s a clarion call to save the planet in a way, and that’s what we’re doing at the moment, we’re trying to save the Earth from all the dreadful things that are going on.”

For the new 40th Anniversary 4k restoration, Flash Gordon was scanned from the original 35mm negative to produce 4K files. Over 500 hours of manual restoration repaired serious damage that included image instability, scratches and intermittent flicker. The sound was scanned from the original track negative and underwent restoration to improve issues ranging from audio drop-outs throughout the feature and during reel changes, digital clicks and optical distortion. The film was colour graded for theatrical, home entertainment and 4K HDR release, using previous digital releases and 35mm prints as a reference. In line with the director’s vision and the original 35mm cinema release, VFX work was applied to remove the strings in all scenes where visible. This restoration was approved by director Mike Hodges in May 2020 and includes the first 4K HDR Dolby Vision master.