Posted by ruthmedia on February 28, 2018 in Uncategorized | Leave a comment

Synopis: Dominika Egorova is drafted against her will to become a sparrow, a trained seductress in the Russian security service. Dominika learns to use her body as a weapon, but struggles to maintain her sense of self during the dehumanizing training process. Finding her power in an unfair system, she emerges as one of the program’s strongest assets. Her first target is Nate Nash, a CIA officer who handles the agency’s most sensitive infiltration of Russian intelligence. The two young operatives fall into a spiral of attraction and deception, which threatens their careers, allegiances and the security of both countries.

Based on the 2013 bestselling novel by former CIA operative, Jason Matthews, it is the first in a trilogy of books (and future films?) about Russian and American espionage, with a screenplay by Justin Haythe [Revolutionary Road (2008), The Lone Ranger (2013), A Cure for Wellness (2016)].

With one character in the thriller declaring ‘The Cold War never ended’, there is a contemporary resonance in this story of a Russian spy and an American spy trying to outwit one another.

Jennifer Lawrence assumes a Russian accent to play Dominika Egorova, a Prima Ballerina whose dancing career is cut short after she suffers a sickening on-stage injury. She lives with her mother (Joely Richardson), an invalid who requires constant care, but at least their apartment and her mother’s medical care are paid for by the Bolshoi. When she loses this privilege after the injury, Dominika has to find a way to make money fast. In a moment of desperation, she agrees to help her ogling uncle Vanya (Matthias Schoenaerts), a Soviet intelligence officer, on one mission.

The assignment unexpectedly ends in an assassination. Since no witnesses outside the intelligence agency can be allowed to live, Dominika has a choice that’s really no choice at all – die or go to school to become a “sparrow.”  At the Sparrow (or ‘Whore’) School, Dominika and other men and women are trained by gimlet-eyed ‘Matron’ (Charlotte Rampling) in how to manipulate and seduce the enemy physically and psychologically.

Emerging as the most dangerous Sparrow after completing the perverse and sadistic training, Dominika is sent to Budapest and ordered to seduce American spy Nate Nash (Joel Edgerton). Her mission is to uncover the identity of a mole who’s almost certainly a high-ranking Russian intelligence officer.

This dense thriller contains strong violence, torture, sexuality, coarse language and some graphic nudity, and the high number of sexual assaults Dominika is subjected to, or the way the camera gazes at its female lead echoing the ogling of her sleazy boss, Volontov (Douglas Hodge) make one of the main mysteries of the film the award of only a 15 certificate.

Overall a gruelling, brutal and disconcerting two hours plus. 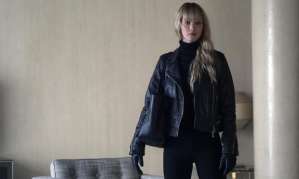 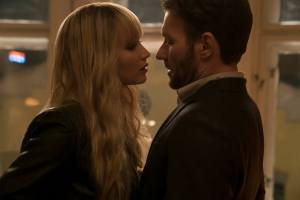