Posted by ruthmedia on February 27, 2018 in Uncategorized | Leave a comment

Synopsis: An outspoken teen must navigate a loving but turbulent relationship with her strong-willed mother over the course of an eventful and poignant senior year of high school.

In Lady Bird, Greta Gerwig [Isle of Dogs (2018), Mistress America (2015), Frances Ha (2012)] reveals herself to be a bold new cinematic voice with her directorial debut, excavating both the humour and pathos in the turbulent bond between a mother and her teenage daughter. Christine “Lady Bird” McPherson (Saoirse Ronan) fights against her mom (Laurie Metcalf), but is in fact exactly like her – wildly loving, deeply opinionated and strong-willed, a nurse working tirelessly to keep her family afloat after Lady Bird’s father (Tracy Letts) loses his job. Set in Sacramento, California in 2002, amidst a rapidly shifting American economic landscape, Lady Bird is an affecting look at the relationships that shape us, the beliefs that define us, and the unmatched beauty of a place called home.

Lady Bird is original, smart, touching and funny.  Saoirse Ronan [ Brooklyn (2015), Atonement (2007)] is mesmerising as the creative, eccentric high school senior, longing for adventure and sophistication and to escape from Sacramento during the economic decline of the early 2000s.

A superb ensemble cast – including Tracy Letts, Lucas Hedges, Timothée Chalamet, Beanie Feldstein, Stephen McKinley Henderson, and Lois Smith – feature in Lady Bird’s pivotal year. But the standout performances are from Ronan and Metcalf, conveying an eloquent and empathetic portrayal of female adolescence and the unconditional love and often enmity of mother-daughter relationships. 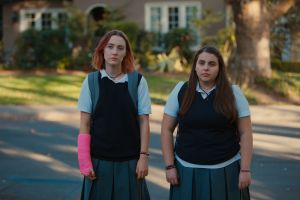 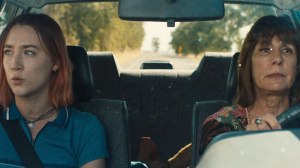