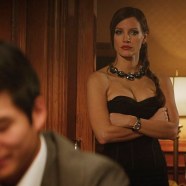 Posted by ruthmedia on December 28, 2017 in Uncategorized | Leave a comment

Synopsis: MOLLY’S GAME is based on the true story of Molly Bloom, an Olympic-class skier who ran the world’s most exclusive high-stakes poker game for a decade before being arrested in the middle of the night by 17 FBI agents wielding automatic weapons. Her players included Hollywood royalty, sports stars, business titans and finally, unbeknownst to her, the Russian mob. Her only ally was her criminal defence lawyer Charlie Jaffey, who learned that there was much more to Molly than the tabloids led us to believe.

Molly’s Game has a frenetically paced, talky, mile-a-minute script, which is energetic and entertaining.

Jessica Chastain is the main reason for the film’s effectiveness. As in Miss Sloane (2016) she plays a powerful woman who’s unafraid to stand up to the men around her. She totally commands Sorkin’s dialogue with élan, but is ably backed by a strong ensemble including Idris Elba, Kevin Costner and Michael Cera.

In Molly’s Game, Molly Bloom (Jessica Chastain) tries to hire lawyer Charlie Jaffey (Idris Elba) to defend her against a federal lawsuit. To convince him to take her on, she tells him her story. Raised by a strict psychologist (Kevin Costner), Molly was once a very promising Olympic skier, but her career was derailed by a freak accident. When she moved to L.A. she got a job working for a sleazy promoter, eventually helping him run high-stakes backroom poker games — the kind that attracted movie stars like “Player X” (Michael Cera). Molly soon learned how the games worked, taking home huge tips. When her boss threatened to take away her salary, she stole his contact list and started her own game. Things fell apart when Russian mobsters became involved in the game and Molly’s drug use spun out of control. She was temporarily saved by the option to write a book about her experiences, but now she needs even bigger help. Will Charlie take the case?

This is a film about poker and Sorkin deals out scenes like a pro, zipping out cards while holding the important ones until really needed – an assured directing debut from a hitherto master film-writer. 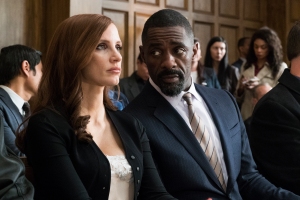