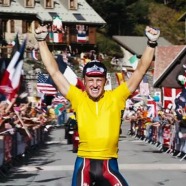 Posted by ruthmedia on October 15, 2015 in Uncategorized | Leave a comment

Synopsis: When an Irish sports journalist becomes convinced that champion cyclist Lance Armstrong is using performance-enhancing substances to fuel his Tour de France victories, he begins hunting for evidence that will take down the legend.

Like Alex Gibney’s thorough documentary The Armstrong Lie, this dramatization chronicles Lance Armstrong’s improbable rise and ultimate fall from grace, but this time from the viewpoint of sports journalist David Walsh (Chris O’Dowd) who becomes increasingly sceptical that the cyclist’s abilities are natural.

All the cast excel and Ben Foster is spectacular with an obvious advantage in having a strong physical resemblance to Armstrong.

Based on Walsh’s book The Seven Deadly Sins, The Program focusses more on Armstrong’s drug deceptions and blood transfusions with shady Italian doctor Michele Ferrari (Guillaume Canet) than on the journalistic investigation.

We also see a totally egotistical Armstrong, cold hearted and prepared to win at all and any cost.  His grand hubris takes him to the top and ultimately destroys all his achievements.

The film ends with Armstrong’s now infamous Oprah Winfrey interview where he admitted that he lied and cheated during all seven Tour de France wins.

Stick around for a nice touch over the final credits – Leonard Cohen’s Everybody Knows. 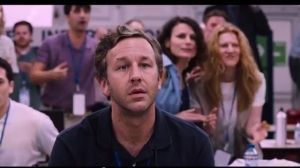