Posted by ruthmedia on March 19, 2015 in Uncategorized | Leave a comment

Synopsis: Brooklyn mobster and hit man Jimmy Conlon has one night to figure out exactly where his loyalties lie: with his estranged son, Mike whose life is in danger, or with his longtime best friend and mob boss Shawn who wants revenge for the death of his own son.

Aging mobster and hit man, Jimmy Conlon (Liam Neeson) faces a desperate night on the run with his estranged son, Mike (Joel Kinnaman) who has witnessed the killing of the son of best friend and mobster, Shawn Maguire (Ed Harris).

A taut script by Brad Ingelsby (Out of the Furnace, 2013) drives this entertaining, superbly acted thriller, as the body count mounts up dizzyingly, while Neeson’s Conlon tries to reconnect with his son.

Look out for an uncredited cameo from Nick Nolte 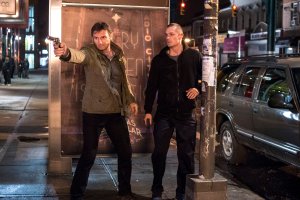