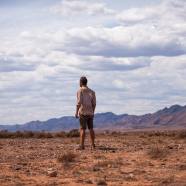 Posted by ruthmedia on September 4, 2014 in Uncategorized | Leave a comment

Synopsis: Set in the near future, the world of The Rover is one where mankind’s greed and excesses have pushed civilization to the breaking point.

In the Australian Outback in a strange dystopian world ten years after the collapse of civilisation, three desperados – fleeing after a botched robbery – abandon their truck and steal a car belonging to Eric (Guy Pearce).  Eric is a bitter, hardened loner who gives relentless chase and eventually kidnaps Rey (Robert Pattison) the injured, learning difficulties brother of one of the bandits, Henry (Scoot McNairy).

Slow and intense, The Rover, from Director David Michôd (Animal Kingdom, 2010), is a visually stunning, surreal film with standout performances from the marvellous Guy Pearce and Robert Pattinson – the latter far from his matinee idol roles.

Pearce’s Eric seems dangerous, hard and distant with no humanity left – “Whatever you think is over for me was over a long time ago” – while Pattinson’s Rey, becomes like a Stockholm Syndrome victim – co-dependent, unwitting, naïve and fragile.

The dreary dingy backdrops for this pursuit narrative with its elliptical dialogue, ramshackle, flyblown unsettling landscapes have been superbly captured by cinematographer Natasha Braier and Production Designer Josephine Ford ably assisted by original music from Antony Partos and a superb soundtrack.

Gruelling, gritty, callous and violent, the world of The Rover remains with you long after you have left the cinema and is another excellent original addition to Australian cinema.

Images courtesy of Entertainment One UK