Posted by ruthmedia on September 29, 2013 in Uncategorized | Leave a comment 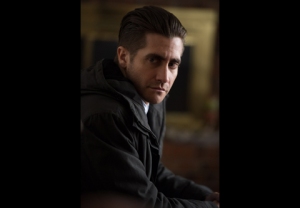 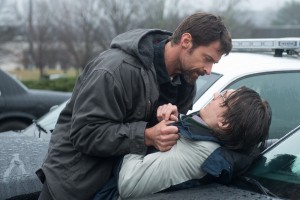 Synopsis: How far would you go to protect your family?  Keller Dover (Hugh Jackman) is facing every parent’s worst nightmare.  His six-year-old daughter, Anna, is missing, together with her young friend, Joy, and as minutes turn to hours, panic sets in.  The best lead is a dilapidated RV that had earlier been parked on their street.  Heading the investigation, Detective Loki (Jake Gyllenhaal) arrests its driver, Alex Jones (Paul Dano), but a lack of evidence forces his release. As the police pursue multiple leads and pressure mounts, knowing his child’s life is at stake, the frantic Dover decides he has no choice but to take matters into his own hands.  But just how far will this desperate father go to protect his family?

Award winning and Oscar nominated, French-Canadian director, Denis Villeneuve gives this tense but over-long thriller about an unpleasant subject an added edge, with its emphasis on moral choices, vigilante behaviour and torture.

The top-class cast give bravura performances to render real a story about moral ambiguity and how far a father should go to rescue his child.  Hugh Jackman is convincing as a distraught father who, after a cosy Thanksgiving celebration with his wife (Maria Bello) and their friends (Viola Davis and Terrence Howard), discovers that both their  young daughters are missing.  Jake Gyllenhaal is the supremely dedicated detective leading a manhunt that in turn shocks, confuses and throws up red herrings in a complex plot from an original screenplay by Aaron Guzikowski.

The talented Paul Dano plays Alex, a young man with severe learning difficulties who lives with his aunt (Melissa Leo) and seems to be the key to the disappearance.  When he is released by the police he becomes the prisoner of the frustrated Jackman and is brutally tortured.

This is a very dark film – well made and acted – about a very testing and morally ambivalent subject area.  With its creepy mise en scene – the dilapidated old camper van and dingy basements – it is reminiscent of the Hannibal Lecter films and also of George Sluizer’s ‘The Vanishing’ with its unrelenting discomfort.

Photographs courtesy of  Entertainment One