Posted by ruthmedia on January 29, 2021 in Uncategorized | Leave a comment

Synopsis: In 2017, Kim Jong-nam—the half-brother of North Korea’s leader Kim Jong-un—was assassinated in the bustling departures hall of Malaysia’s international airport. The spectacularly brazen murder happened in broad daylight, filmed entirely by security cameras. Footage showed two young women approaching Jong-nam from behind, covering his eyes with their hands, and pressing VX—the most lethal nerve gas on earth—into his eyes. He stumbled away and was dead within an hour. But if the murder was extreme, the story that came next was even more bizarre. The two women who killed Jong-nam claimed they had simply been hired to pull a video prank and had no idea what they were really doing. The Malaysian government scoffed, but then arrested and imprisoned the women and put them on trial for murder, facing execution. But was their outlandish story actually the truth? And would anyone believe them? Assassins, the latest film from director Ryan White, travels from the sanctums of Pyongyang to the rice fields of Indonesia and Vietnam to the courtrooms of Kuala Lumpur to tell an extraordinary tale of manipulation and subterfuge in the age of social media. A masterful investigation that offers an unprecedented look at the real story of Kim Jong-nam’s murder, ‘Assassins’ is the wildly improbable tale of a calculating dictator, a nefarious plot, a very public murder, and two women fighting for their lives.

The audacious murder of the brother of North Korea’s Supreme Leader Kim Jon-Un in a crowded Malaysian airport sparked a worldwide media frenzy. At the centre of the investigation were two young women who were either cold-blooded killers or unwitting pawns in a political assassination. Assassins goes beyond the headlines to question every angle of this case, from human trafficking to geo-political espionage to the secretive dynamics of the North Korean dynasty.

The two girls, Siti Aisyah and Doan Thi Houng – from Indonesia and Vietnam – were either naïve, poor innocents eager to help their struggling families, or wannabees craving celebrity in a social media age, or trained assassins or the innocent pawns of North Korea?

While the details of the case alone make this edge-of-your-seat viewing, White skilfully layers it with the bigger issues of society’s treatment of women, sexism, grooming, gaslighting, sex trafficking, immigrants, and of the powerful who will do anything to remain in office.  His control of the many complex narrative threads is masterful.

Assassins in turn sends chills down your spine and reduces you to tears, at the same time being as riveting and preposterous as an airport bookshop page-turner.

Siti and Doan, Indonesian and Vietnamese immigrants respectively, strangers to each other admitted to being hired to commit the act, but they thought they had participated in a prank video. The pair, financially struggling, had been filming pranks for some time before the fateful day. They claimed they had no idea who they had been asked to approach. They thought the chemical agent on their hands, VX—the most lethal nerve gas on earth—  was ‘baby oil’.

The film is an extraordinary snapshot of success and celebrity innocently craved, and then accidentally achieved for all the wrong reasons, as the parties became unwitting pawns in a deadly international chess game.

On streaming platforms and in virtual cinemas. 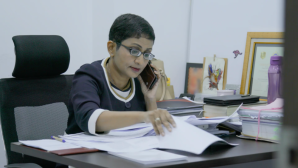