Posted by ruthmedia on September 28, 2020 in Uncategorized | Leave a comment

SYNOPSIS: Davie is a dreamer from the council schemes, constantly hustling for his next buck, then losing it on the horses. After a football injury, Davie falls for trainee nurse Shona  and tries to impress her by running a disco. Along with friends John and Scot, the trio start promoting bands – culminating in a hugely ambitious Iron Maiden gig at the Caird Hall, Dundee. With ambition so grand, they end up deep in debt with Fergie, a gangster of legendary violence. Davie needs to use every trick to pull off the biggest scheme of his life.

Influential music promoter and manager Dave McLean writes and directs this story of his own late 70s/early 80s experiences, bringing then rising star acts like Iron Maiden and Simple Minds to often improvised venues in Dundee, all while still a student. McLean would later go on to manage the successful rock band Placebo, whose cover of Boney M’s ‘Daddy Cool’, features in the film.

Energetic, fun, fast moving and entertaining, Schemers’  main strength is its characters and situations, and how they build an aspirational tale based on achievement against all odds by Dave McLean, played wonderfully by newcomer Conor Berry, ably supported by Sean Connor [River City (2002),  Still Game (2002)] as Scot and Grant Robert Keelan [Cold (2019)] as John, with Tara Lee [A Date for Mad Mary (2016), The Fall (2016), Moon Dogs (2016), EastEnders (2018)] as Shona the trainee nurse he fancies.

Mclean’s story picks up in 1979 with Davie in his early twenties, a product of Dundee’s dour housing schemes, desperate to escape the drudgery of a factory job after injury curtails his footballing ambitions. Roping in friends and family members, Davie turns to promoting gigs at a local club night. But as his ambitions grow bigger, so does the ire of neighbourhood heavy Fergie [Alastair Thomson Mills] who Davie owes money to. It all builds up to a fraught attempt to book hot new outfit Iron Maiden, whose unlikely and momentous real-life concert forms the film’s climax.

The title card for the film features the message “Proudly made in Dundee”.  McLean’s love for his home city is clear with local landmarks, popular culture and distinctive humour highlighted in this enjoyable romp. 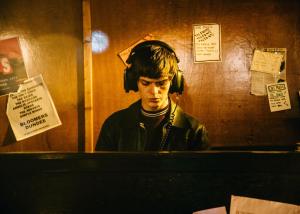