Posted by ruthmedia on September 24, 2020 in Uncategorized | Leave a comment

Synopsis: Turquoise Jones is a single mum who holds down a household, a rebellious teenager, and pretty much everything that goes down at Wayman’s BBQ & Lounge. Turquoise is also a bona fide beauty queen – she was once crowned Miss Juneteenth, a title commemorating the day in 1865 when enslaved people in Texas were freed, two years after the Emancipation Proclamation. Life didn’t turn out as beautifully as the title promised, but Turquoise, determined to right her wrongs, is cultivating her daughter, Kai, to become Miss Juneteenth, even if Kai wants something else.

Writer/Director Channing Godfrey Peoples brings us this warm hearted and beautifully observed feature film debut, a multi-dimensional, authentic, story of an African American mother who wants her teenage daughter to win the Miss Juneteenth pageant and take advantage of the educational scholarship and social advantages she was not able to seize in her own life.

Fifteen years ago, Turquoise Jones [(an outstanding performance from Nicole Beharie –American Violet (2008), Shame (2011)] was the winner of the prestigious Miss Juneteenth pageant in Fort Worth, Texas. But her days of wearing a crown are long gone: Now she works long hours to support herself and her headstrong teenage daughter, Kai (Alexis Chikaeze), as Kai’s irresponsible father, Ronnie (Kendrick Sampson), comes and goes. Kai is finally old enough to take her own turn in the Juneteenth pageant, but she is less than thrilled about the prospect. Will Turquoise be able to propel her daughter to a brighter future than she herself had? Or will the pageant be the straw that pushes mother and daughter beyond their limits?

Using a delicate touch to tell this beautifully written mother-daughter story, Channing Godfrey Peoples well deserves the praise she has attracted for such a subtle and emotionally rich film with a superb ensemble cast.

‘Phenomenal Woman’, a Maya Angelou poem, is referenced frequently in Miss Junteenth, which seems totally appropriate in Channing Godfrey Peoples’  story, that is ultimately about hope and resilience.

In cinemas and digital platforms now. 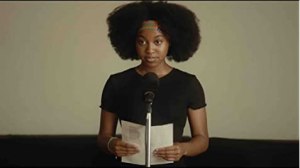