Posted by ruthmedia on September 19, 2020 in Uncategorized | Leave a comment

Synopsis: An exploration of how punk influenced politics in late-1970s Britain when a group of artists united to take on the National Front.

Rock Against Racism (RAR) was formed in 1976, prompted by widespread disgust at on-stage racist comments in support of MP Enoch Powell by Eric Clapton – “music’s biggest colonialist”. White Riot takes us back to those days, blending fresh interviews with archive footage to recreate the hostile environment of the 1970s with its anti-immigrant hysteria and National Front marches.

It is a relevant and uplifting film, telling the vital story of a somewhat neglected national protest movement, when a group of artists united to take on the National Front. As neo-Nazis recruited the nation’s youth, RAR’s multicultural punk and reggae gigs provided rallying points for resistance. As founder Red Saunders explains: ‘We peeled away the Union Jack to reveal the swastika’.

Much of the second half of the film centres around The Clash’s performance at that now legendary open-air concert in Victoria Park, with marvellous archive footage of the support acts: Steel Pulse, X-Ray Spex, the Tom Robinson Band and Sham 69’s Jimmy Pursey

The story of how Rock Against Racism combatted fascism in ’70s Britain has some disturbing contemporary parallels, with the racist ideologies of fascist groups still in circulation today.

Shah’s thrilling, inspiring documentary shows that prejudice was not limited to outright racist groups such as the National Front. It was ingrained in British society, assisted by law enforcement bodies, and present in popular culture on television screens.

White Riot has themes which have become even more relevant with the rise of movements like Black Lives Matter; as Shah points out racism doesn’t go away and movements like RAR are still needed to tackle abuses on a global scale. 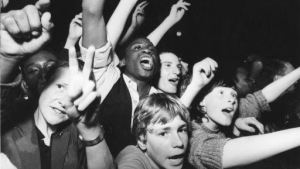 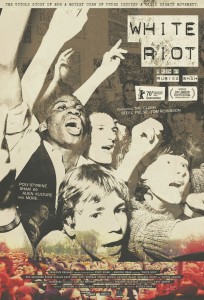