Posted by ruthmedia on August 19, 2020 in Uncategorized | Leave a comment

Synopsis: In this live-action adaptation of the beloved fairytale, old woodcarver Gepetto (Roberto Benigni), fashions a wooden puppet, Pinocchio (Federico Ielapi), who magically comes to life. Pinocchio longs for adventure and is easily led astray, encountering magical beasts, fantastical spectacles, while making friends and foes along his journey. However, his dream is to become a real boy, which can only come true if he finally changes his ways.

In this new imagining of the iconic classic beloved across the world, Matteo Garrone returns to the authentic roots of the Pinocchio story. With this ground-breaking live action film shot in stunning Italian locations, Garrone creates a rich fantasy world of mystery and wonder, filled with luminous, funny and touching moments.

The film stars child actor Federico Ielapi as the title character, celebrated Italian comic actor, Roberto Benigni as Mister Geppetto, Gigi Proietti as Mangiafuoco, Rocco Papaleo and Massimo Ceccherini as The Cat and the Fox, and Marine Vacth as the adult Fairy with Turquoise Hair.

Pinocchio has been a passion project for Garrone, who drew the first storyboard of the tale at the age of six. Unlike his previous films, which were all adult themed, Pinocchio is for both adults and children. Most characters, including Pinocchio himself, were lovingly created through prosthetic make-up rather than CGI.

Garrone demonstrates as with his Tale of Tales (2015) that his gift is to highlight the original adult, dark, grotesque and disturbing aspects of fairytales and then to retell them in his very distinctive style.

The film is stunning in every aspect, from the beautiful cinematography of Nicolai Brüel to the great score of Academy Award winner Dario Marianelli, with elaborate and authentic costumes and sets. Special mention also to the top-notch make-up by Academy Award winner Mark Coulier.

Matteo Garrone’s film pulls every string to create a visually stunning and memorable film that proves some tales really are timeless. 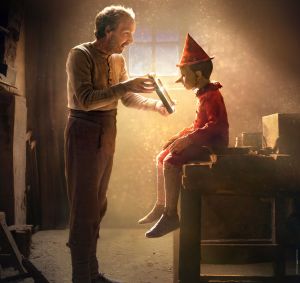 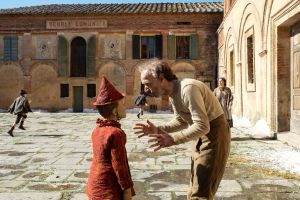