Posted by ruthmedia on June 27, 2020 in Uncategorized | Leave a comment

Synopsis: Antiquarian booksellers are part scholar, part detective and part businessperson, and their personalities and knowledge are as broad as the material they handle. They also play an underappreciated yet essential role in preserving history. THE BOOKSELLERS takes viewers inside their small but fascinating world, populated by an assortment of obsessives, intellects, eccentrics and dreamers.

Director D.W. Young [A Hole in a Fence (2008), The Happy House (2013), A Favor for Jerry (2017)]  in The Booksellers shows us that antiquarian booksellers are a mix of scholar, detective and businessperson, with personalities and knowledge as broad as the material they handle. They also play an unsung vital role in preserving history, and this masterly documentary takes us inside their fascinating world, where we meet an assortment of obsessives, intellects, eccentrics and dreamers.

Executive produced by Parker Posey, the film features interviews with some of the most important dealers in the business, as well as prominent collectors, auctioneers, and writers such as Fran Lebowitz, Susan Orlean, Kevin Young and Gay Talese. Both a loving celebration of book culture and a serious exploration of the future of the book, the film also examines technology’s impact on the trade; the importance of books as physical objects; the decline of used and rare bookstores; collecting obsessions; and the relentless hunt for the next great find.

We are taken into a world of grand and intimate old mysterious bookstores. The film is set primarily in New York City – with a few forays to London – and it takes us inside the beautiful and historic Park Avenue Armory for the NYC Antiquarian Book Fair.

Many of the stores go back to the 1920s, when 4th Ave., known as ‘book row’ in Manhattan, had close to fifty bookstores, most of them owned and operated, in the words of Fran Lebowitz, by “dusty Jewish men who would get irritated if you wanted to buy a book.” That, says Lebowitz, is because they had gone into the business mostly so they could sit around and read all day. The film takes us inside New York’s most fabled bookshop, the Argosy Book Store, founded in 1925 by Louis Cohen and now run by his daughters, Judith, Naomi, and Adina, who are in the rare position of being able to keep the dream alive because they have the fortune to own the six-story building that houses their store on E. 59th St.

The Booksellers offers a rare glimpse of many unique and remarkable objects, including the most expensive book ever sold (Da Vinci’s ‘The Codex Leicester’); handwritten Borges manuscripts; jeweled bindings; books bound in human flesh; essential early hip-hop documents; accounts of polar expeditions published with samples of real woolly mammoth fur; and many more.

This film is for all those who wish to understand the historical relevance of books in our cultured society, and who would endorse the words of one contributor: “Books are a way of being fully human.” 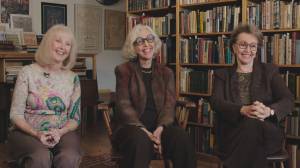 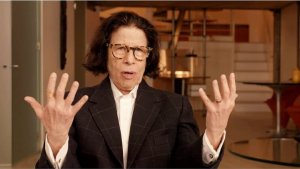 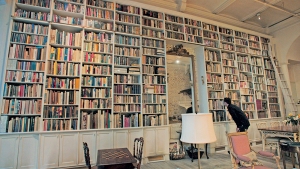