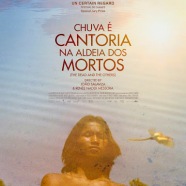 Posted by ruthmedia on June 22, 2020 in Uncategorized | Leave a comment

SYNOPSIS:15-year-old Ihjãc, an indigenous Krahô from the north of Brazil, is called to organize the funerary feast for his father so that his spirit can depart to the dead’s village. Denying his tribal duty, Ihjãc runs away to the city, where he faces the reality of being indigenous in contemporary Brazil.

The Dead and The Others is their collaboration with the indigenous Kraho people and the first film ever made in the Jê language. Salaviza and Messora used non professional performers improvising their lines, shot on 16mm to lend authenticity to this compelling docudrama about a tribal culture through the lens of a young man resisting his destiny as a shaman on the outskirts modern Brazil.

The film opens with a fantastical nocturnal encounter, between Ihjac (Henrique Ihjac Kraho) and the voice of his father, who recently died, who appears bodiless from the pool underneath a waterfall. Fearful of this ghostly speaking water Ihjac returns to his wife, Kôtô (Raene Kôtô Krahô) and young child in  the village to prepare the final mourning feast which will allow him and the rest of the community to forget his father and the past.

Frightened of the future he begins feel ill. In the forest, he becomes unconscious, and in a dream state is told by a macaw that he’s destined to become a shaman. Not pleased by this unwanted news, Ihjãc develops pains which he decides can only be cured by white men in the nearest town of Itacaja. So against the advice of his wife, Kôtô, and other members of the tribe, he leaves the village of Pedra Branca for the second time in his life.

In Itacajá, he’s told his aches are psychosomatic, and he’s allowed to remain for only a short period of time in the town’s communal Krahô home. Injac indecisively lingers in the town, unwilling to return to face his father’s death and all it entails.

The Dead and The Others provides insight into customs and beliefs –under threat -and  very different from ours- particularly the villagers’ attitude toward the dead, who are mourned for a limited period of time and then to be forgotten from memory in order not to weigh down the living.

Intriguing and visually stunning the cinematography is painterly and empathetic.