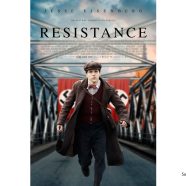 Posted by ruthmedia on June 16, 2020 in Uncategorized | Leave a comment

SYNOPSIS: Before he becomes a world-famous mime, aspiring Jewish actor Marcel Mangel joins the French Resistance to save thousands of orphaned children from the regime of the Nazis in occupied France.

Venezuelan filmmaker and writer Jonathan Jakubowicz [Hands of Stone (2016), Secuestro Express (2005)] brings us this previously untold true story. Before he was the world-famous mime Marcel Marceau, he was Marcel Mangel, an aspiring Jewish actor who joined the French Resistance to save the lives of thousands of children orphaned at the hands of the Nazis. Jesse Eisenberg [Vivarium (2019), The Social Network (2010), The Squid and the Whale (2005), Adventureland (2009), Zombieland (2009)]  stars in this compelling drama about a group of unsung heroes who put themselves in harm’s way to rise above hatred and oppression during World War II. As a young man growing up in Strasbourg in Nazi-occupied Europe, Marcel has at first no intention of getting involved in the war. His pursuits include impersonating Charlie Chaplin in burlesque clubs, painting backdrops for his plays, and antagonizing his obstinate father, Charles Mangel (Karl Markovics). His life is thrown into upheaval when he is recruited into the French Resistance, putting his acting skills to the ultimate test in teaching orphaned Jewish children how to survive in the horrifying reality of the Holocaust. Based on this inspiring true story, Resistance tells a revolutionary tale of a selfless act that would forever change countless lives.

Resistance is an honourable and sincere tribute to its real-life protagonist. Mangel was writing plays when he joined the French Resistance, where he focussed on saving Jewish orphans, which took wit and nerve and all his miming skills. In one particularly nerve-rattling scene, he uses mime to guide them to safety as Nazis approach, led by the Butcher of Lyon, Klaus Barbie (Mattias Schweignoefer giving a frightening and nuanced bravura performance.) Ed Harris as General George S. Patton has a cameo role addressing his troops in Nuremberg in 1945. Clémence Poésy is luminous as Resistance fighter Emma. Marcel’s cousin Georges (Géza Röhrig), close friend Sigmund (Édgar Ramírez), and Emma are in charge of caring for thousands of Jewish orphans, whose parents were killed by the Nazis. Marcel reluctantly decides to help and uses his skills to entertain the children and for a moment take their minds off the global tragedy of war.

With an excellent ensemble cast backing up Eisenberg’s convincing portrayal of the heroism of the legendary Marcel, this is a story that needs telling and remembering. 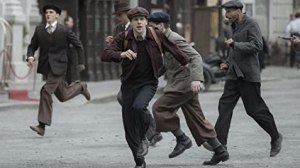