ONLY THE ANIMALS (Seules Les Bêtes) (15)

Posted by ruthmedia on June 1, 2020 in Uncategorized | Leave a comment

ONLY THE ANIMALS (Seules Les Bêtes) (15)

Synopsis: Following the disappearance of a woman during a snowstorm, five strangers in a remote mountain town are caught up in a mystery that spans continents and which none of them expected.

Only the Animals’  mystery begins with a young African riding through the streets of  Abidjan, Cote d’ivoire,  with a goat resting on his shoulders, then cuts without explanation to the south of France, to an agricultural region of the Causse Mejean, where there has been a discovery of a young woman’s body in the wintery mountains.

We are introduced to Alice (Laure Calamy), a farmer’s wife and insurance saleswoman, visiting her neighbour Joseph (the perennially morose Damien Bonnard) to discuss business. It soon transpires that they are having an affair. Joseph later finds an abandoned car on the side of the road that once contained the now deceased Evelyne (Valeria Bruni Tedeschi).

Michel (Denis Ménochet), Alice’s husband, returns home with a smashed-up face. We learn that Evelyne was having an affair with a waitress named Marion (Nadia Tereszkiewicz) and that it wasn’t going well. Eventually we discover that Michel is in digital communication with a cyber swindler in Africa.

Every minute adds on another puzzle to the accumulating complexities. The film introduces us in turn to these six overlapping lives, with clever point-of-view shifts that appear to clarify apparent anomalies in previous scenes, only to wrong foot us again. Screenwriters Dominik Moll and Gilles Marchand build a clever jigsaw from all the elements of the non-linear script, resulting in an engrossing structure around the two central mysteries – who killed Evelyne? and why does loneliness, limerence and passion lead to immoral acts and tragedy?

When Armand (Guy Roger N’drin) visits the wizard marabout Papa Sanou (Christian Ezan) for spiritual guidance, he is told two prophetic things: “Chance is stronger than you, idiot!” and “Love is giving what you don’t have.”

The ensemble cast are superb, particularly a consistently glowering Denis Ménochet. Cinematographer Patrick Ghiringhelli makes the most of Only the Animals’ atmospheric locations in Lozère, or further south in the French port commune of Sète on the Mediterranean, or in faraway Abidjan, aided by an outstanding original score from Benedikt Schiefer.

The film’s focus is on the sadness of remote lives, and how unrequited love overrides some actions and emotions, with startling coincidences and mysteries that keep the viewer hooked. 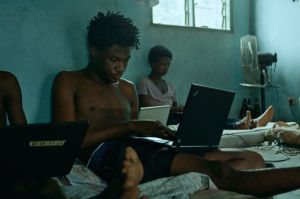