Home » Uncategorized » Nona: If They Soak Me, I’ll Burn Them (Nona: Si me mojan, yo los quemo) 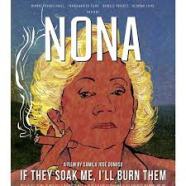 Nona: If They Soak Me, I’ll Burn Them (Nona: Si me mojan, yo los quemo)

Posted by ruthmedia on April 5, 2020 in Uncategorized | Leave a comment

Nona: If They Soak Me, I’ll Burn Them (Nona: Si me mojan, yo los quemo)

Synopsis: After an act of vengeance on the home of her ex-lover, Nona, 66, flees to her summer house on the Chilean coast. There, forest fires are spreading, but her home is undamaged. While houses go up in flames, Nona displays different sides of her character: the grandmother, the friend, the anarchist.

For her third film, Chilean director Camila José Donoso [Casa Roshell (2017), Naomi Campbel (2013)] enlists her grandmother’s help to make this film, a mix of fact and fiction, a dreamlike character study of Nona, an incendiary woman with deep Pinochet-era scars, defiant behind her shades and an all-round force of nature.

Donoso not only creates a close-up portrait of an ambivalent, colourful character, whom she clearly loves deeply as a granddaughter, but also offers a wider account of an older generation and a complex country still scarred by Pinochet’s dictatorship. The experimental drama, with cinematography by Matías Illanes, is told in various film formats, including low-resolution video images, Super 8 colourful home videos and crystal-clear digital images, as a reflection of Nona’s multifaceted character.

A former member of the anti-Pinochet resistance in Chile – and expert at making petrol bombs – 66-year-old Nona (Josefina Ramirez, Donoso’s real grandmother) is seen first of all leaving Santiago, apparently to recuperate after a cataract operation but also with a need for a quick exit after some not-entirely-specified act of vandalism and revenge.

Fleeing to her summer house in Pichilemu, a Chilean coastal town, she is apparently happy there until a series of forest fires drives many of her neighbours from their homes. Fear strikes the quiet shady streets. The police investigation turns up nothing, neighbours are unsettled, but Nona’s small home is undamaged. More and more houses go up in flames, while this enigmatic protagonist displays the different sides of her character – Nona the grandmother, Nona the friend, Nona the anarchist, Nona the storyteller, joker, liar – and Nona the firebrand.

This hybrid film is a fascinating mix of fact and fiction, shot in a mix of film formats. Although Donoso was inspired by events and people in her own life, centring round her eccentric grandmother, the film largely consists of fictional elements, all of which makes for a demanding, and often uncomfortable watch.