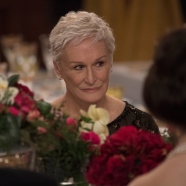 Posted by ruthmedia on October 1, 2018 in Uncategorized | Leave a comment

Synopsis: On the eve of her husband’s Nobel Prize for Literature, Joan has reached a turning point: she will confront the biggest sacrifice of her life and some long-buried secrets.

Swedish director Bjorn Runge [Happy End (2011), Mouth to Mouth (2005), Daybreak (2003)] with a screenplay by Jane Anderson, based on the novel of the same name by Meg Wolitzer, brings this impeccably made drama to the screen with an utterly stunning lead performance from Glenn Close [Damages (TV, 2007-12), Albert Nobbs (2011), Fatal Attraction (1987)] as Joan Castleman – a wife who questions her life choices as she travels to Stockholm with her narcissistic husband, who is set to receive the Nobel Prize in Literature.

She has spent forty years sacrificing her own talent, dreams and ambitions to support her charismatic husband Joe [Jonathan Pryce – Glengarry Glen Ross (1992), Wolf Hall (2015), Taboo (2017)] and his stellar literary career. Ignoring infidelities and excuses made in the cause of his art, she has put up with his behaviour with undiminished grace and humour. The foundations of their marriage have, however, been built upon a set of uneven compromises and Joan has reached a turning point. On the eve of Joe’s Nobel Prize for Literature, the crown jewel rewarding a spectacular body of work, Joan will confront the biggest sacrifice of her life and some long-buried secrets.

Exquisite performances of extraordinary power from the two leads as their complex marital issues surface are backed by a strong ensemble, headed by Christian Slater [True Romance (1993), Mr Robot (TV, 2015-19)] as a persistent, stalker-like, would-be biographer of the Laureate.

The Wife is a heartrending and emotional tale, a celebration of self-discovery and liberation, which will prove to be a clear nomination winner for the superb Glenn Close. 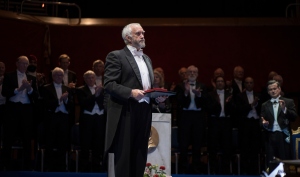