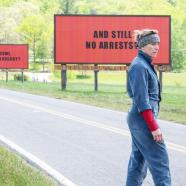 THREE BILLBOARDS OUTSIDE OF EBBING, MISSOURI (15)

Posted by ruthmedia on January 15, 2018 in Uncategorized | Leave a comment

THREE BILLBOARDS OUTSIDE OF EBBING, MISSOURI (15)

Synopsis: After months have passed without a culprit in her daughter’s brutal murder, Mildred Hayes makes a bold move, buying three signs leading into her town with a controversial message directed at William Willoughby the town’s revered chief of police. When his second-in-command Officer Dixon an immature mother’s boy with a penchant for violence, gets involved, the battle between Mildred and Ebbing’s law enforcement intensifies.

Her provocative action in renting the eponymous billboards sparks a series of moral ambivalences for all the main characters in this dark, unpredictable but heart-rending drama. Her quest to get justice for her daughter’s rape and murder pits her against William Willoughby [Woody Harrelson – True Detective (TV 2014-2015), The Hunger Games (2012-2015)], the town’s revered chief of police. His second-in-command Officer Dixon [Sam Rockwell – Moon (2009), Seven Psychopaths (2012)] is an immature mother’s boy, a racist with a penchant for violence, whose involvement exacerbates the battle between Mildred and Ebbing’s law enforcement officers.

With a superb ensemble cast and a stellar leading performance from McDormand ably backed by Harrelson and a career-best from Rockwell, THREE BILLBOARDS OUTSIDE EBBING, MISSOURI has razor sharp writing, editing and direction.

The clever blend of horror, grief, violence and the darkest of humour displayed while Mildred shows that she is a force to be reckoned with, coupled with the way the characters around her in this sleepy town evolve to deal with loss and tragedy makes THREE BILLBOARDS OUTSIDE EBBING, MISSOURI one of the year’s best films. 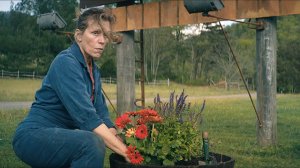