Posted by ruthmedia on October 23, 2017 in Uncategorized | Leave a comment

Synopsis: Adventurous and charismatic, Robin Cavendish has his whole life ahead of him when he is paralysed by polio whilst in Africa in 1958. Against all advice, Robin’s wife Diana brings him home from hospital where her devotion and witty determination transcends his disability. Together they refuse to be imprisoned by his suffering, dazzling others with their humour, courage and lust for life.

When Robin (Andrew Garfield – Hacksaw Ridge (2016), Silence (2016)] is struck down by polio at the age of 28 he is confined to a hospital bed and given only a few months to live.

Robin’s wife Diana (Claire Foy – The Crown , Wolf Hall ) brings him home from hospital and with the help of her twin brothers (Tom Hollander – The Promise (2016), The Night Manager) and the ground-breaking ideas of inventor Teddy Hall ( Hugh Bonneville – Viceroy’s House (2017), Downton Abbey (2010-2015) they seek out a full life together and raise their young son, devoting their lives to helping other polio patients.

Based on the true story of producer Jonathan Cavendish’s own parents with a screenplay from William Nicholson (Gladiator (2000), Les Miserables (2012) Breathe is an inspirational and highly emotional celebration of bravery and human possibility, a love story about living every breath as though it’s your last.

Robin Francis Cavendish, MBE (12 March 1930 – 8 August 1994), was a British advocate for disabled people, medical aid developer, and one of the longest-lived responauts (A person permanently dependent upon a ventilator (artificial respirator) to maintain breathing in Britain.

Stellar performances from the two leads are a fitting tribute to the couple’s devotion and witty determination to transcend disability.

Together the couple refuse to be imprisoned by his suffering, dazzling others with their humour, courage and lust for life. 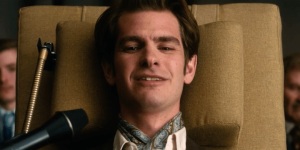