Posted by ruthmedia on September 14, 2017 in Uncategorized | Leave a comment

Director Stephen Frears [Florence Foster Jenkins (2016); Philomena (2013); The Queen (2006); High Fidelity (2000)] brings us this mostly true story about the twilight years of Queen Victoria, with a script by Lee Hall based on the 2010 book by Shrabani Basu.

The extraordinary story explores an unexpected friendship in the later years of Queen Victoria’s (Academy Award winner Judi Dench) lengthy reign. When Abdul Karim (Ali Fazal), a 24-year-old humble clerk, travels from Agra, India to participate in the Queen’s Golden Jubilee, he is surprised to find favour with the Queen herself. As the Queen questions the constrictions of her long-held position, the two forge an unlikely and devoted alliance with a loyalty to one another that her household and inner circle all attempt to destroy.

Abdul becomes a powerful figure at court, becoming the Queen’s teacher or Munshi and instructing her in Urdu and Indian affairs.

As the friendship deepens, the Queen begins to see a changing world through new eyes and joyfully reclaims her humanity. But this controversial relationship with the Munshi led to a near-revolt in the royal household.

The film is almost a sequel to Mrs Brown (1997) in that it deals with another of Queen Victoria’s unconventional friendships. Judi Dench’s powerful and matchless portrayal of the doughty Queen delights and always feels totally authentic

Ali Fazal brings charm and a wide emotional range to the portrayal of Abdul and there is a top-notch ensemble cast including the final performance from the late Tim Piggott-Smith as Sir Henry Ponsonby and Eddie Izzard as the scheming, self-serving, son Bertie; and there is much humour in Lee Hall’s witty script for Adeel Akhtar’s Mohammed and Paul Higgins’ Scottish doctor.

An entertaining and poignant look at the twilight years of the great Queen Victoria, is cemented with a magnificent central performance from Judi Dench. 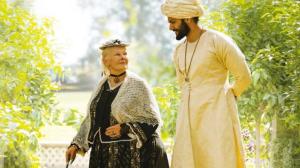