Posted by ruthmedia on July 30, 2017 in Uncategorized | Leave a comment

Synopsis: From DreamWorks Animation comes an epic feature film about a hero and his underpants. Two boys create a homemade comic book character that becomes real when they hypnotize their fun-crushing school principal and convince him that he…is tra-la-la…CAPTAIN UNDERPANTS.

Beautifully and creatively animated – as we would expect of Dreamworks [Shrek (2001), Kung Fu Panda (2008), Madacascar (2005)] – this is a side-splittingly funny entertainment for children and adults alike, provided they can tolerate innocent potty/scatological humour and underpants.

George (Kevin Hart) and Harold (Thomas Middleditch) are two imaginative best friends who hypnotise their petty and mean-spirited school principal Mr Krupp (Ed Helms) into believing that he is the dim-witted and enthusiastic Captain Underpants, the superhero of the comic books that they write together in their tree house.

Humourless, nerdy classmate, Melvin (Jordan Peele) informs Principal Krupp of the existence of evidence of George and Harold’s pranks, resulting in a threat to have the boys separated into different classrooms. So they take action to save their friendship, with a prize from a cereal box – a ‘3D Hypno-Ring’.

There is more mayhem when a new threat appears in the form of the villainous Professor Poopypants (Nick Kroll) who is on a mission to rid the world of laughter.

Alongside its laugh-out loud moments, Captain Underpants has positive messages and lessons about what makes a friendship or team really strong, and about the importance of having empathy for others and standing up to bullies; it also states its case for the positive effects of the arts, creativity and music in children’s education.  But beware – you may not be able to look at ‘tighty-whities’ in the same way again! 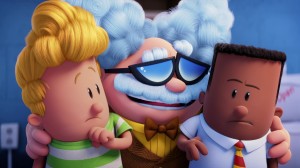