Home » Uncategorized » THE LIGHT BETWEEN OCEANS (12A) 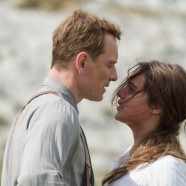 THE LIGHT BETWEEN OCEANS (12A)

Posted by ruthmedia on November 3, 2016 in Uncategorized | Leave a comment

THE LIGHT BETWEEN OCEANS (12A)

Synopsis: Based on the bestselling novel by M. L. Stedman, ‘The Light between Oceans’ tells the powerful story of a lighthouse keeper and his wife living off the coast of Australia who discover a baby adrift in a rowboat. When they decide to raise the child as their own, the consequences of their choice will change their lives forever.

Director Derek Cianfrance [Blue Valentine (2010), The Place beyond the Pines (2012)] brings us this heart-breaking, emotional, romantic drama, with Alicia Vikander and Michael Fassbender starring as a as a couple facing a moral dilemma.

On the remote island of Janus in Western Australia in the aftermath of WWI, traumatised war veteran Tom Sherbourne (Michael Fassbender) works as the lighthouse keeper. He’s married to warm and vivacious Isabel (Alicia Vikander), who’s the love of his life. But unfortunately the couple are unable to have children. When a rowing boat washes ashore containing a dead man and a baby girl, Isabel implores her husband to keep the child and pretend that she is their own. But this decision has far-reaching and life-changing consequences.

A substantial ensemble supporting cast includes Australian veteran actors Jack Thompson and Bryan Brown, while Brit Rachel Weisz shines in a pivotal role. Cinematographer Adam Arkapaw has shot one of the most starkly beautiful films of this year. The film is a deliberately tragic and gut-wrenching one-off, well worth viewing.

Images courtesy of Entertainment One