Posted by ruthmedia on December 4, 2015 in Uncategorized | Leave a comment

The heady mix of director Todd Haynes, the adaptation of Patricia Highsmith’s The Price of Salt and the luminous talents of Cate Blanchett and Rooney Mara combine to make the perfect film.

Haynes, director of Far from Heaven (2002), Velvet Goldmine (1998), Poison (1991) – with cinematographer Edward Lachman (Erin Brockovitch, 2000; Far from Heaven (2002) and especially costume designer Sandy Powell and composer Carter Burwell – has sumptuously recreated the 1950s New York world of the elegant, sophisticated Carol who is wealthy and married, but on the brink of divorce.

Cate Blanchett, star of Blue Jasmine (2013), Elizabeth: The Golden Age (2007), Notes on a Scandal (2006), Veronica Guerin (2003)  turns in another mesmerising performance in the title role, while Rooney Mara, acclaimed for her performances in Her (2013), Side Effects (2013), The Girl with the Dragon Tattoo (2011), creates a career defining role as Therese, which brought her a Best Actress award at Cannes.

The wonderful script from Phyllis Nagy (Mrs Harris, 2005) is spare and utterly faithful to Patricia Highsmith’s book which was originally published under the pseudonym ‘Claire Morgan’ in 1952 and is loosely based on a romance Highsmith had with an older Philadelphia socialite. It is a powerful romance fuelled by the suspense, danger and exhilaration of forbidden love.

In New York 1952, Carol is elegant, sophisticated, wealthy and married. Therese is just starting out in life, unsure of who she wants to be. A chance encounter in a Manhattan department store sparks an extraordinary friendship between these two women. Carol is caught in a bitter divorce and a custody battle for her daughter with husband Harge (Kyle Chandler), when she finds herself mesmerised by this mysterious, quiet beauty. Finding herself alone on Christmas Day, Carol invites Therese to escape on a spontaneous road trip into the heartland of America. It is during this magical journey that the two fall hopelessly and desperately in love. But this is 1952 and Carol is risking everything for this relationship that defies society’s conventions.

A flawless film engrossing, subtle and beautiful.  A must see. 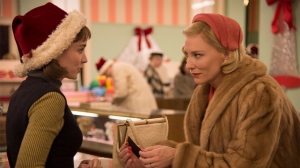