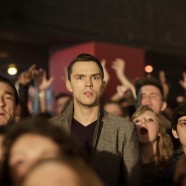 Posted by ruthmedia on November 10, 2015 in Uncategorized | Leave a comment

Synopsis: London, 1997; the British Music Industry is on a winning streak. 27-year-old A&R man Steven Stelfox is slashing and burning his way through the music business, where careers are made and broken by chance and the fickle tastes of the general public. Fuelled by greed and ambition, Stelfox lives the dream, as he searches for his next hit record. But as the hits dry up and the industry begins to change, Stelfox takes the concept of “killer tunes” to a murderous new level in a desperate attempt to salvage his career.

Nicholas Hoult stars as unscrupulous Britpop-era talent spotter Steven Stelfox in this scabrous music biz satire. In 1997, there’s no cooler place to be than London. With Britpop reaching its zenith, and Blur and Oasis riding the Cool Britannia wave, the greedy, cynical, satanic, 27-year-old A&R man Stelfox will stop at nothing to find the next hit. Misanthropic and cocksure, this drug-addled music business fixer despises his boss (James Corden) more than anyone. But just how far is he prepared to go to advance his career?

It’s hard to care about the loathsome Stelfox or any of his victims and the revelation that in the ‘90s people in the music business were interested only in money and not art is hardly earth shattering.

For a final verdict on the film, one is tempted to steal and paraphrase Woody Allen’s Diane Arbus joke from Manhattan (1979): Kill Your Friends feels like American Psycho – with none of the wit.