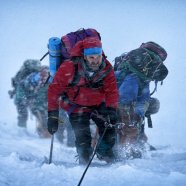 Posted by ruthmedia on September 20, 2015 in Uncategorized | Leave a comment

Synopsis: Inspired by the incredible events surrounding an attempt to reach the summit of the world’s highest mountain, Everest documents the awe-inspiring journey of two different expeditions challenged beyond their limits by one of the fiercest snowstorms ever encountered by mankind. Their mettle tested by the harshest elements found on the planet, the climbers will face nearly impossible obstacles as a lifelong obsession becomes a breathtaking struggle for survival.

This truly spectacular film from director Baltasar Kormákur [(Contraband (2012), 2 Guns (2013), 101 Reykjavik (2000)], written by William Nicholson (Gladiator) and Simon Beaufoy (127 Hours) opened the 72nd Venice International Film Festival on September 2, 2015; it is based on the real events of the 1996 Mount Everest disaster of 10–11 May when eight people were caught in a blizzard and died during summit attempts.

Star studded and breathtakingly photographed by Salvatore Totino, Everest focuses on two expeditions, Adventure Consultants and Mountain Madness, who meet at base camp and prepare to climb Mount Everest in the following days. Rob Hall (Jason Clarke) is one of three guides for Adventure Consultants, whose eight clients include Beck Weathers (Josh Brolin), who had been climbing for ten years, Doug Hansen (John Hawkes), who was climbing to prove an ordinary man can pursue an extraordinary dream, and Yasuko Namba (Naoko Mori), who had previously climbed six of the Seven Summits and was attempting to become the oldest woman to reach the summit of Everest. Scott Fischer (Jake Gyllenhaal) is the guide for Mountain Madness.

The tragedy highlighted the overcrowding and almost conveyor belt attitude to reaching the summit of the Earth’s highest mountain and the unpredictability of the weather and small window of opportunity for success. The statistic is given in the film that one in four of those who attempt to climb Everest dies, but no real answer is given as to why they try.

Everest is a stunning entry into the disaster film genre with truly awesome technical and special effects and sound design.  The film truly chills but it’s a hard task for the large cast – who mostly have sketchily drawn backstories – to fully engage our empathy. The women’s roles – with the exception of a moving silent performance from Emily Watson as Helen Wilton, base camp co-ordinator – are consigned to wives waiting at home facing unbearable emotional distress.

Ultimately the cinematography and the technical depiction of what an Everest ascent might be like are what Kormákur has compellingly created.