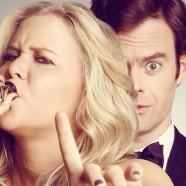 Posted by ruthmedia on August 19, 2015 in Uncategorized | Leave a comment

Synopsis:  Amy is a journalist working for a men’s magazine. She doesn’t believe in monogamy after being told it is a lie from her father when she was a little girl. Determined never to settle down and marry like her sister Kim, Amy fills her nights sleeping with different men and avoiding commitment. However, that all changes when she meets Aaron, a hardworking doctor and genuine good guy…

Trainwreck takes a new approach with a sexually assertive, woman played by the highly talented Amy Schumer whose views on monogamy are tested when she goes to interview a charming and successful sports doctor, Aaron Connors (Bill Hader).  There is plenty of witty, frank, sexual dialogue with one night stands involving male instead of female nudity and all the other romcom staples being gender flipped. There are a few interesting sub plots about caring for an infirm parent, Gordon (Colin Quinn), and sibling rivalry with sister Kim (Brie Larson).

An unrecognisable Tilda Swinton plays Dianna, Amy’s ludicrously shallow boss at the magazine.  There are also humorous cameos from LeBron James and Daniel Radcliffe and Marisa Tomei in a film within a film.

Despite being slightly too long and opting for a conventional romcom resolution after a spiky and fresh opening, Trainwreck is basically good fun and Amy Shumer shows evidence of a major talent. 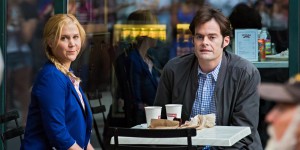