Posted by ruthmedia on May 18, 2014 in Uncategorized | Leave a comment

Synopsis: Jiro dreams of flying and designing beautiful airplanes, inspired by the famous Italian aeronautical designer Caproni.  Near-sighted from a young age and thus unable to become a pilot, he joins the aircraft division of a major Japanese engineering company in 1927. His genius is soon recognized, and he grows to become one of the world’s most accomplished airplane designers. THE WIND RISES chronicles much of Jiro’s life, and depicts key historical events that affected the course of his life.

Reported to be Director Hayao Miyazaki’s last film before retirement, and based on a manga of the same name, The Wind Rises is the fictionalised biography of Jiro Horikoshi, a designer of fighter aircraft used by the Empire of Japan in the Second World War. Taking its title from a Paul Valéry poem, the film eloquently moves from early 20th century Japan through to the earthquake of 1923 and on to the aftermath of the Second World War, chronicling the fragility of humanity and love through its hero. Gorgeously animated, Miyazaki trades one last time in fantastical and dreamy drama with beautiful period detail.

This is an involving, compassionate and heart-breaking film, with mesmerising animation and an evocative score from Joe Hisaishi. 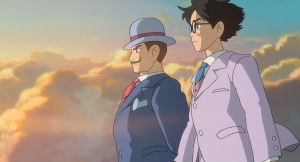