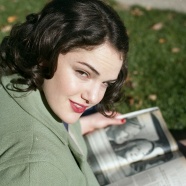 Posted by ruthmedia on November 10, 2013 in Uncategorized | Leave a comment

Synopsis: At the turn of the twentieth century, child labour was ending, ‘adolescence’ was emerging, and a struggle erupted between adults and youth. Would the young be controlled and regimented, or could they be free?

Teenagers did not always exist. In this living collage of rare archival material, filmed portraits, and voices lifted from early twentieth century diary entries, director Matt Wolf traces the fascinating struggle that developed between adults and adolescents to define a new idea of youth.

Inspired by punk author Jon Savage’s 2007 book of the same name, Teenage gives voice to young people from the first half of the twentieth century in America, England, and Germany—from party-crazed Flappers and hip Swing Kids to zealous Nazi Youth and frenzied Sub-Debs. By the end of World War II, they were all ‘Teenagers’: a new idea of youth.

A thought-provoking, beautifully edited collage, this film allows us to hear the voices of youth at the centre of major world events and history, where they have so often been previously overlooked.